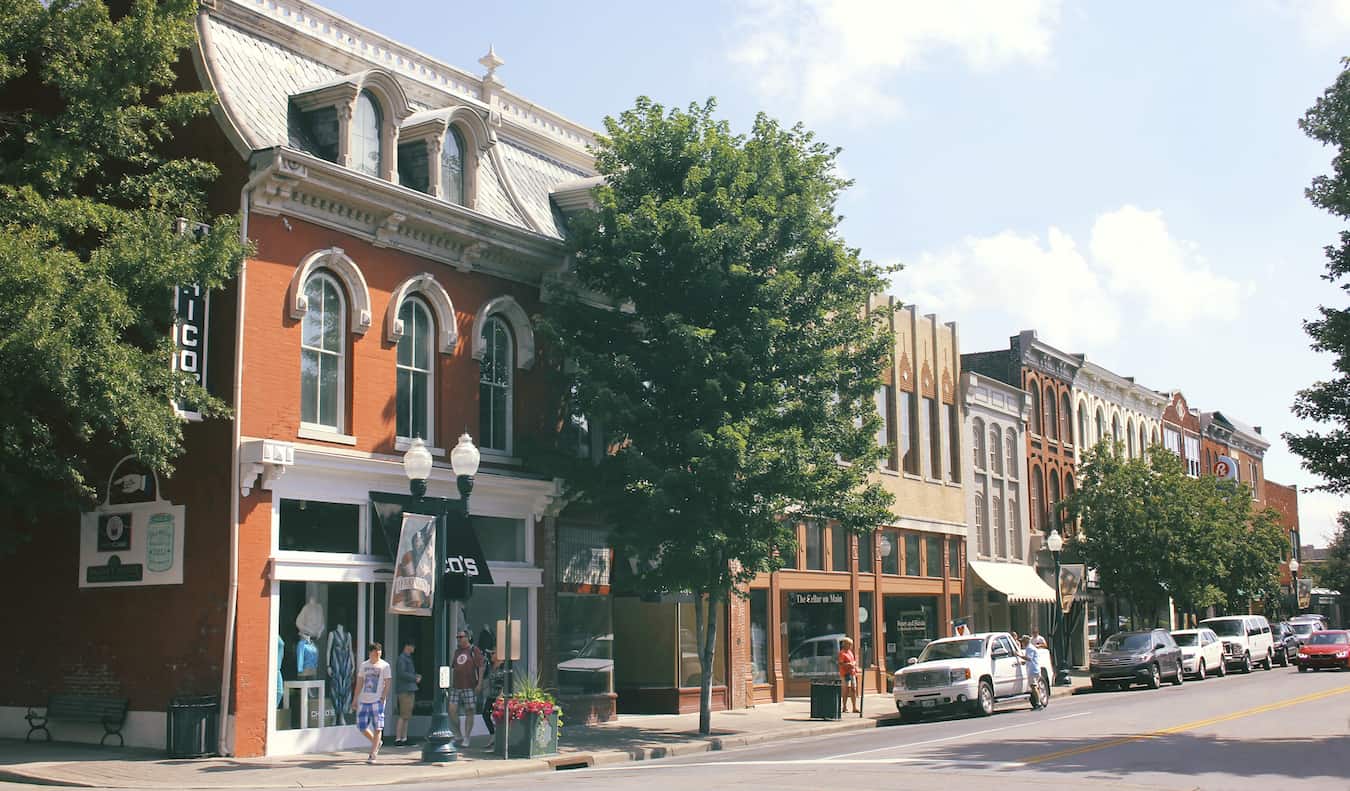 “Want some bourbon?” the giant of a man in front of me asked.

“I mean, I could never say no to such an offer,” I said as I raised the little plastic sample cup to my mouth and sipped the amber liquid. “Oh, wow. That’s good. Smooth.”

I’d never heard of Franklin, Tennessee, until that moment I met Matt from the city’s tourism board at TravelCon in 2019 as he poured me a drink.

“Sure, I just might,” I said, followed by “maybe one day…” I thanked him and left, thinking I’d soon forget about Franklin and its bourbon, just like I often do when most tourism reps ask me to visit. “Maybe one day” translates to “likely never,” because there are just too many places to see in this big, wide world of ours, and I run on my own schedule.

But, as it happens, I did get there.

In the summer of 2020, during the peak of the pandemic, I drove home to Boston to see my parents, get out of the Texas heat, and satiate my wanderlust by doing the only thing we really could do at the time: take a road trip.

As a recently-recovered, COVID-antibody-rich person, I felt comfortable making the drive and stopping on the way.

When I visited a friend in Nashville, I noticed on Google Maps that I was close to Franklin. “Oh, that’s only 40 minutes away? Maybe I’ll go there for a couple of days.”

So, I called up Matt and he said to come visit. He told me there was one hotel open.

Founded in 1799, the city was named after Benjamin Franklin. Before the Civil War, the area was one of the wealthiest in Tennessee, with forced slave labor creating a plantation economy that produced hemp and tobacco and raised livestock.

In 1864, the city played a major role in the Civil War. The Battle of Franklin was one of its bloodiest battles, with over 8,000 casualties, including significant losses in leadership for the Confederate side.

Now home to about 80,000 people, Franklin is an odd mix: part hipster (from those who left Nashville) and part old South (translation: a lot of religious white folks). There are moments you feel like you’re in what’d you think a small town in the middle of Tennessee should be — and others when you’re in some up-and-coming place, where yoga and açai bowls abound like the craft beer flowing at all the new breweries. It will make you wonder if you’re not in Portland with a Southern accent.

What a place it is!

The historic main street, unlike so many others in old small towns in America, is vibrant — filled with restaurants, bars, and shops, as well as a movie theater straight out of the 1950s. The town square is also home to several monuments to those who fought in the Battle of Franklin.

Moreover, there are a lot of outdoor activities, thanks to its proximity to the Natchez Trace, a historic forest trail originally used by Native Americans. The trail stretches 440 miles, from Nashville, Tennessee, to Natchez, Mississippi.

Today, it is used for hiking and biking. You can also drive the Natchez Trace Parkway, a two-lane road that closely follows the entire length of the original trail.

And, as Matt promised, I got my bourbon fix. We drove out to the countryside to visit some distilleries, but the highlight of our tour was H. Clark, the distillery of the bourbon that so wowed me at TravelCon.

“Distillery” is actually too kind of a word. Yes, there is a still there, but it’s not the kind of distillery that you might typically expect. Located in the quaint town of Thompson’s Station, it and its tasting room are in an unassuming building that farmers used to use to house grains.

Back in 2008, one of its founders, Heath Clark, was simply a lawyer who decided he wanted to distill his own bourbon. But despite Tennessee being famous for its bourbon, at that time it was still a mostly dry state that only allowed distilling in three counties.

So, by using his connections and lobbying the legislature in Nashville, he got a law passed in 2009 that allowed counties to decide if they wanted to be “wet” or “dry.” This rebirthed the state’s bourbon business, leading to an explosion of craft distilleries across Tennessee.

At the end of my time in Franklin, I was more than impressed with this little town.

And, last month, as I drove home from TravelCon in Memphis, I was in no rush to get back home to Austin, so I took the long way, driving east to Florida for a few days on the beach. Along the way, I stopped again in Franklin. Matt had invited me out to relax after the event for a few days — and I needed more bourbon, my limited supply of H. Clark having been depleted long ago.

On this return visit two years after the first, things were a lot different. There were a bunch of new restaurants and bars, plus a lot more people — all that marketing they did to attract regional tourists during the pandemic paid off.

I happened to overlap with Amanda from A Dangerous Business, a blogger I have known since the beginning of my blogging days. We went back to H. Clark (now Company Distilling), ate a ton of food, and caught up.

It was actually a perfect metaphor for what Franklin is: a place where you walk, eat, and drink. Sure, if you leave the downtown core, you’ll see the offices of lots of Fortune 500 companies, but historic Franklin is where you’ll spend most of your time.

There’s plenty to fill a weekend here (but not enough for a week): a few walking tours, the Civil War battlefield, brewery and distillery visits, some hiking and biking trails on the Natchez Trace, and browsing the musty old bookstore run by a guy straight out of a William Faulkner novel.

But you’ll mostly eat, drink, and eat some more. There’s JJ’s wine bar, O’ Be Joyful for cocktails, Puckett’s for traditional Southern food, Franklin Mercantile for an eclectic menu of sandwiches and funky decor, and countless other places with portions that could feed a family (come to Franklin hungry).

With the Nashville airport only 30 minutes from town, I think it’s perfect for a 2-3-day trip.

I don’t think I would have discovered if Franklin wasn’t for TravelCon, and I am glad I did. It has turned into one of my favorite destinations in the United States.

I have a feeling that next time I’m driving through the South, my car might magically take me through Franklin. If your car does too, don’t resist. After all, there’s all that amazing bourbon and much more waiting for you.

My New York Times best-selling paperback guide to world travel will teach you how to master the art of travel so that you’ll get off the beaten path, save money, and have a deeper travel experience. It’s your A to Z planning guide that the BBC called the “bible for budget travelers.”

Click here to learn more and start reading it today!

Book Your Flight
Find a cheap flight by using Skyscanner. It’s my favorite search engine because it searches websites and airlines around the globe so you always know no stone is left unturned.

Book Your Accommodation
You can book your hostel with Hostelworld. If you want to stay somewhere other than a hostel, use Booking.com as they consistently return the cheapest rates for guesthouses and hotels.

Don’t Forget Travel Insurance
Travel insurance will protect you against illness, injury, theft, and cancellations. It’s comprehensive protection in case anything goes wrong. I never go on a trip without it as I’ve had to use it many times in the past. My favorite companies that offer the best service and value are:

Ready to Book Your Trip?
Check out my resource page for the best companies to use when you travel. I list all the ones I use when I travel. They are the best in class and you can’t go wrong using them on your trip.

Be the first to know the latest updates